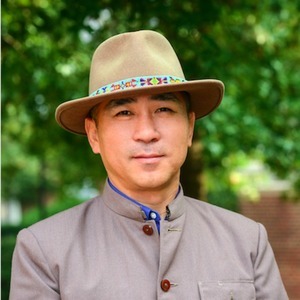 Zibin Guo is a UC Foundation Professor who received his Ph.D. in medical anthropology from the University of Connecticut. Prior to joining the UTC faculty, Dr. Guo served as lecturer in the Department of Social Medicine of Harvard Medical School and the director of Clinical Studies at New England School of Acupuncture. He specializes in applied medical anthropology and has extensive research background in cross-cultural medicines & healing arts, aging & health, complementary medicine (Tai Chi and Chinese medicine in particular) , community health, culture & disability studies. Since the past decade, Dr. Guo’s research activities have been focusing on applying traditional healing cultures and methods to develop innovative intervention programs which would effectively change health behavior and promote physical and psychological well-being among vulnerable populations.

In 2005 Dr. Guo developed a form of wheelchair Tai Chi Chuan (TCC) program making a traditional healing/martial art accessible to people with ambulatory limitation. A key feature of this innovative program is that it integrates wheelchair motions with the flowing movements of TCC to transform the wheelchair from an assistive device to a tool of empowerment and artistic expression. Dr. Guo’s program was debuted at 2008 Paralympics. Since then it has not only become a part of national health promotion programs in China, but it also has been adapted in various rehab and self-care settings throughout the world. In recognizing Dr. Guo’s achievement, Dr. Guo was presented with the Love Award by the Tennessee Higher Education Commission and the “Most Innovative Special Populations Research Award” by the academic committee of the International TCC Symposium at Vanderbilt University in 2009. Dr. Guo’s work also appears in the Journal of Technology and Innovation.

During past few years, Dr. Guo collaborated on several large HRSA Grants with the School of Nursing to develop effective intervention programs to improve physical and mental fitness of vulnerable populations including individuals with Severe Persistent Mentally Illness and inner-city youth. Dr. Guo also have been working with faculties from computer science, psychology and physical therapy to develop the “Virtual Taiji System” (VTJS). The VTJS is an innovative program that is designed as an effective and accessible mind and body fitness and rehabilitation modality for individuals who are ambulatory challenged due to spinal cord injuries or disease. Since 2016, Dr. Guo has received three major grants from the U.S. Department of Veterans Affairs to promote the wheelchair Tai Chi program among veterans with disabilities across the country.