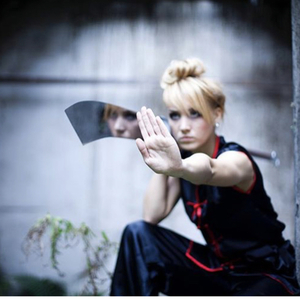 Svitlana Zavialova is a Ukrainian born Visionary Martial Movement Performing Artist. She is the founder of the Wu Woman Martial Movement style (the fusion of traditional Kung Fu and Futuristic Dance), Actor and Entrepreneur.

Born in Post Soviet Crimea and made her way to the motherland of Kung fu, China and becoming a success in Chinese traditional martial arts. Svitlana later transcended her highly technical martial arts performance style into new form of movement story telling where martial movement is used as an instrument for conveying all spectrums of human emotions. Her style is inspired by the complexity of human consciousness.

In her solo live show Hidden Wu, based on an introspective dialogue of Wu Ze Tian, the vigilant Empress of China and her inner life journey, has been showcased worldwide. It was also performed at the Divided Unity Contemporary Exhibition – one of the biggest contemporary exhibitions in Asia. Zavialova was honored to be the only western performer ever invited to perform a modern contemporary piece based on the life of a historical Chinese figure.
The Wu Woman pushes the existing constructs about what martial arts is. She pursues the phenomenon of “Shen-fa”; the unspoken connection between the body and mind.

Since wrapping her competitive wushu career in 2012, Svitlana performed in and directed a variety of films, television, commercials, conceptual installations and live performance shows, including Mandarin Bridge, one of the biggest live TV shows on Chinese television, directed by Xie Fu Yin, collaborated on development of the latest Virtual reality camera with Kandao Technologies, performed at New York Fashion week 2019 in collaboration with Wone Fashion Brand.